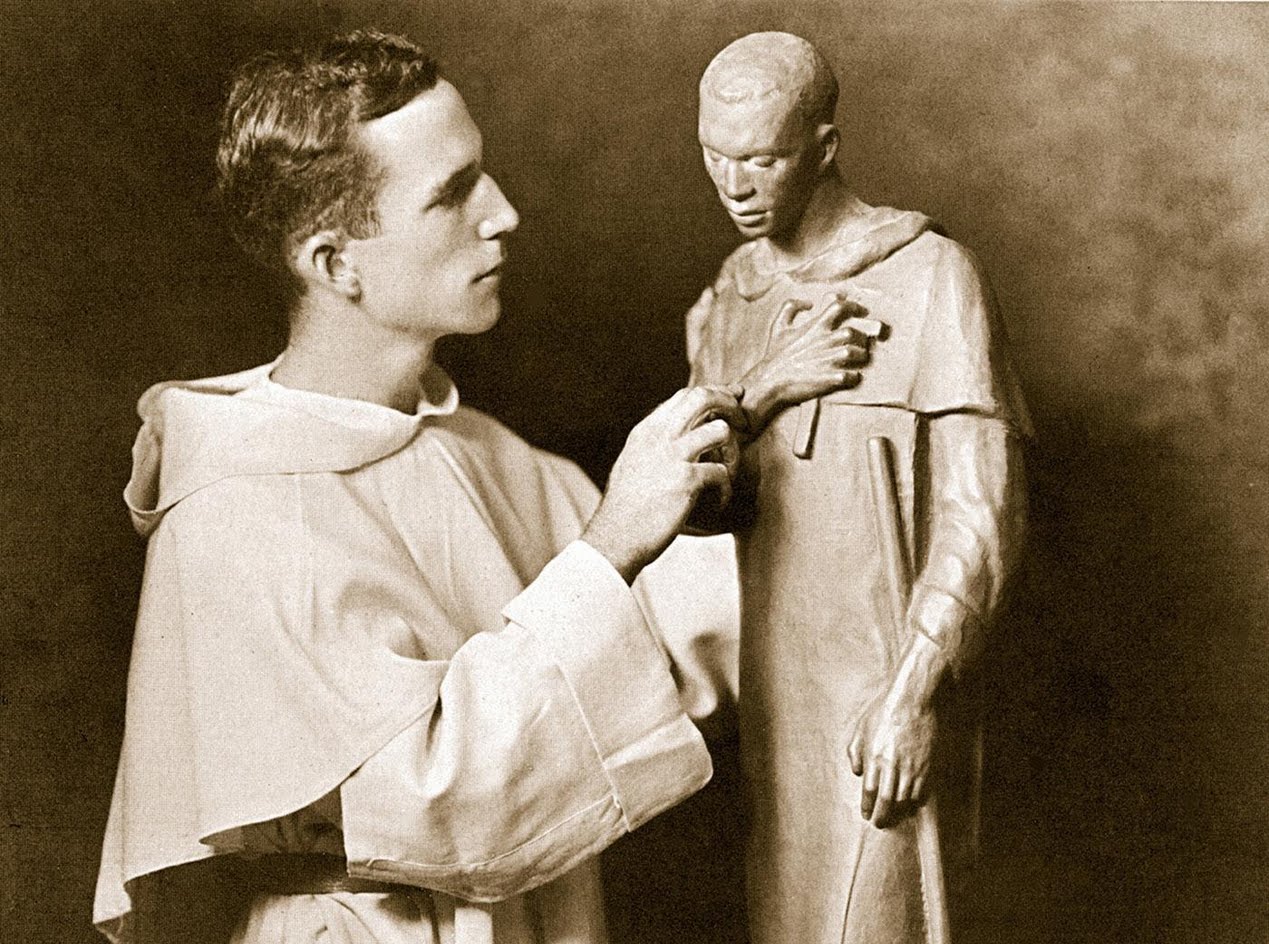 The Saint John Paul II Society was honored to have Paul and Rebecca O’Herron with us on at the 100th Anniversary Miracle of the Sun vigil Mass on October 12. Paul prepared the following remarks about his uncle, Fr. Thomas McGlynn, O.P, the Dominican priest and sculptor who created the statue of Our Lady of Fatima that adorns our shrine under the direction of Fatima visionary Sister Lucia herself.

Thank you for the remembrance of Fr. Thomas McGlynn. We called him Tom, so allow me to do so here.

I’d like to mention a bit about Tom himself.

He was a priest and an artist. He was also a colorful human being and a good friend.

He ran around on a Harley; he wrote poems; back in the 1940s he wrote a play that stimulated white people to understand more deeply the sufferings of black folk.

MaryRose, Tom’s older sister, had 6 children. We were his next generation. He visited us often. Once we were making a lot of noises in French and German. Soon after full sets of teach yourself records arrived in the mail. Another time he sent some dresses for my sister without knowing any sizes. They fit perfectly. A sculptor’s eye.

And we visited him in Italy. In the mid-50’s he got himself posted to Pietrasanta, Italy so he could work full time as a sculptor. Full-time priest, too. He visited the prison, took a few poor families under his wing, knew everyone in town, talked to the high and the low in the same way.

At that time the cafes were divided by political affiliation. Tom was welcome in both of them.

In 1966 there was a big flood in Florence. Instead of worrying about art, Tom dropped everything to go there and help organize relief.

He came back for big family events. He came for our wedding at the beginning of 1977. Still full of ideas – a statue out in California, a big Francis statue for Assisi, which he correctly predicted would become a world prayer center. But the Lord had other plans. A check-up revealed lung cancer. He got an honorary degree at Providence College – where a faithful friend Fr. Richard McAllister constructed and maintains a center displaying his sculptures and writings.

You asked about the 1967 pilgrimage – I may be a bit blurry on this:

A friend suggested to Tom walking to Fatima as a prayer for peace and other things. So on February 11th they set out from Rome for the 1,600-mile journey. They had wanted to rely on charity for provisions and lodging but that didn’t work out. I had gone to the Holy Land for Good Friday and Easter with a friend. We joined them by the Northwest corner of Spain.

We two had the easy part. April in Castile is a lot warmer than February in the mountains. By the time we joined them they had developed a routine; walk 4 kilometers at 11 minutes each and then rest for 15 minutes. Repeat this again and again. You might picture us walking side by side and talking, but that takes too much energy. The rhythm gets inside you and frees your mind for prayer and to see and hear more deeply God’s beautiful world.

We went at the pace everybody went before trains and cars – about 20-25 miles a day.

You have to figure out where and when you can find food and a place to stay. And that was not at all routine! One night we lodged in what must have been a barn, and another night we had no choice but to land in a fancy hotel.

One incident sticks out: Just inside Portugal some arrangements had been called ahead. The local priest understood 2 people were coming at a reasonable hour. Instead, 4 of us showed up at about 1 in the morning. A rather heated conversation melted into Latin and the language of Caesar and Nero rang out in the Iberian night; Tom’s “Ego dixi quattor,” may have been the last living utterance to close out the Roman Empire.

When we got to Fatima on May 12, oceans of pilgrims had come, some on their knees – though none from so far. Paul VI himself came to lead the celebrations.

When Tom got back his doctor said his 60-year old heart had improved!

God bless and thank you tonight for lifting our hearts as well.