Entrusted with a First Class Relic 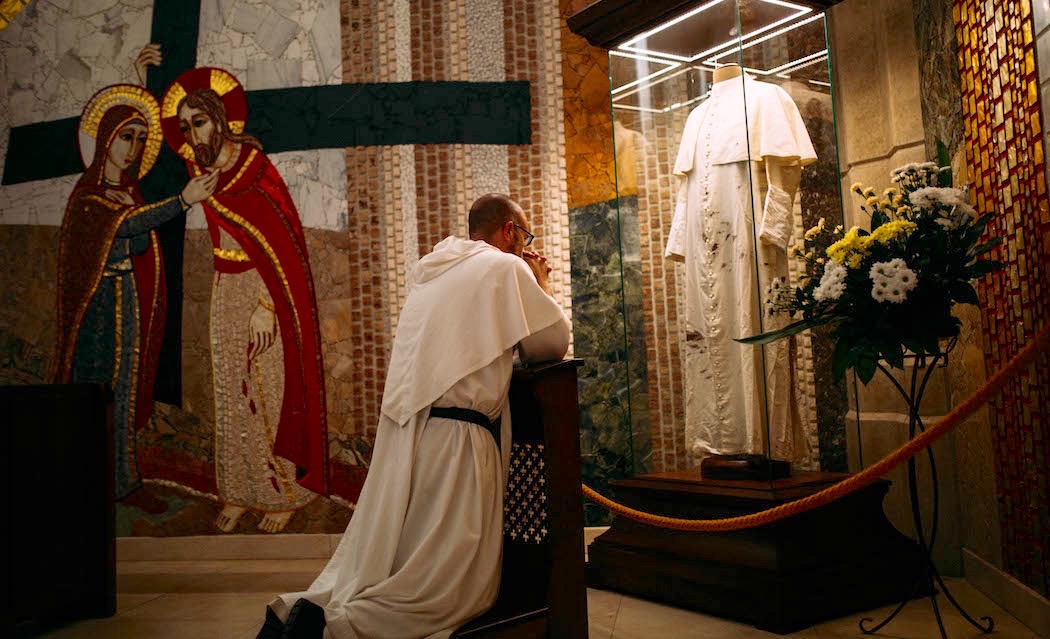 The St. John Paul II Society is honored to have been entrusted with the keeping of a first-class relic of St. John Paul II: a piece of the bloody sash he wore during the assassination attempt of 1981 in St. Peter’s Square. Last summer, while leading a pilgrimage for the College Knights of Columbus and the Sisters of Life in the lead up to World Youth Day in Kraków, Poland, I had the privilege to visit the Saint John Paul II Sanctuary, originally the site of the Zakrzowek rock quarry, where a young Karol Wojtyła was forced to work during the five-year Nazi occupation of Poland. There, together with my Dominican brothers, I prayed for the founding of the St. John Paul II Society before the cassock bearing the drops of blood of the sainted Holy Father.

We also followed in the footsteps of another saint who championed the Gospel of Jesus Christ against the ideologies of his day. At Auschwitz, we sought the intercession of St. Maximillian Kolbe, the great promoter of devotion to the Immaculate Heart of Mary, who hid 2,000 Jews from persecution before being taken to Auschwitz himself. On the site where we prayed, Fr. Kolbe gave his own life in place of another prisoner who had been sentenced to death.

A hand-painted icon of St. Maximillian Kolbe has been commissioned for display beside the images of the Holy Father at the official shrine of the St. John Paul II Society in New York. Both men testified with their lives that the Gospel outlives the ideologies of any age, because only Jesus Christ fulfills the deepest longing of the human heart!

With the founding of the Society and its shrine, I am proud to promote the witness of St. John Paul II as a powerful antidote against the false ideologies of our own time, and his heavenly intercession as a beacon for all who are suffering or in need.

We couldn’t do it without YOU, our donors. Thank you and may God bless you through the intercession of St. John Paul the Great!